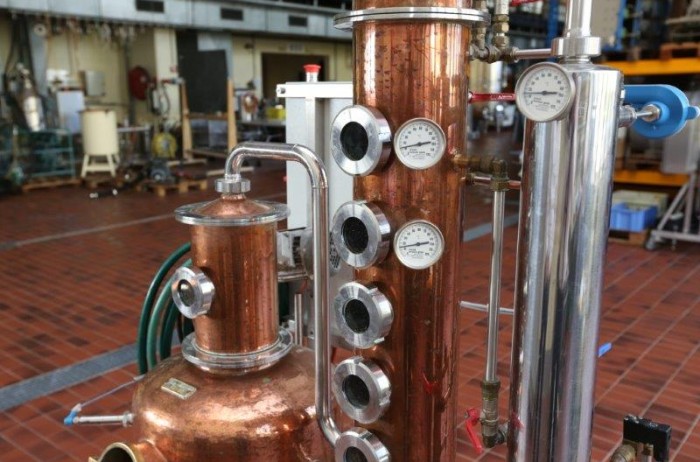 The distillate is divided in three parts according to its components and its quality: the head, the heart and the tail. The head is the first part of the distilled liquid to be produced and mainly contains unpleasant substances, as well as methanol, which is toxic, and therefore to be eliminated. The skill of the distiller consists of the ability to establish when the head of the distillate ends and when the so-called heart, the best part of the distilled beverage rich in ethanol and aromatic substances, starts to come out. The distiller’s skill is also judged by his ability to recognise the end of the heart and the start of the tail, the last part of the distillate which will be eliminated, since it contains unpleasant fatty and oily substances. These separations were often only partially automated and were mainly carried out through ethanol measurement and tasting. The main objective of the project was to obtain an optimal fractional distillation. In this purpose, a pilot (Holstein, 25 L) was automatized. To do so, the alembic was mounted with temperature and pressure sensors. Moreover, the flow rate and the density (alcohol concentration in % Vol.) of the produce spirit was measured on line. Moreover, the methanol, ethanol, acetaldehyde and ethyl acetate were measured by an infrared detector. The data provided by these sensors were collected by a computer, which then back controlled the heating of the vessel, as well as the condensation, to adjust the flow and the alcohol level of the distillate. This real-time monitoring allows a better control of the distillation and fractionation.