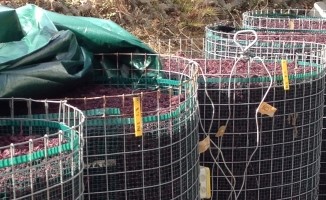 Medium-chain-length polyhydroxyalkanoates (mcl-PHAs) are biobased and biodegradable alternatives to petrol-derived polymers, whose break-through has been prevented by high production cost. Therefore we investigated whether wastes from the food industry (nine types of fruit pomace including apricots, cherries and grapes, and waste frying oil) could replace the costly sugars and fatty acids typically used as carbon substrates for the bacterial fermentations. A selection of enzyme preparations was tested for converting the residual polysaccharides from the pomaces into fermentable monosaccharides. From the pomace of apricots, cherries and Solaris grapes, 47, 49 and 106 g L−1glucose were recovered, respectively. Solaris grapes had the highest sugar content whereas apricots contained the fewest growth inhibitors. These two pomaces were assessed for their suitability to produce mcl-PHA in bioreactor. A 2-step fermentation was established with Pseudomonas resinovorans, hydrolyzed pomace as growth substrate and WFO as mcl-PHA precursor. Solaris grapes proved to be a very promising growth substrate, resulting in the production of 21.3 g PHA (L pomace)−1 compared to 1.4 g PHA (L pomace)−1 for apricots. Finally, capillary zone electrophoresis analyses allowed monitoring of sugar and organic acid uptake during the fermentation on apricots, which led to the discovery of reverse diauxie in P. resinovorans.