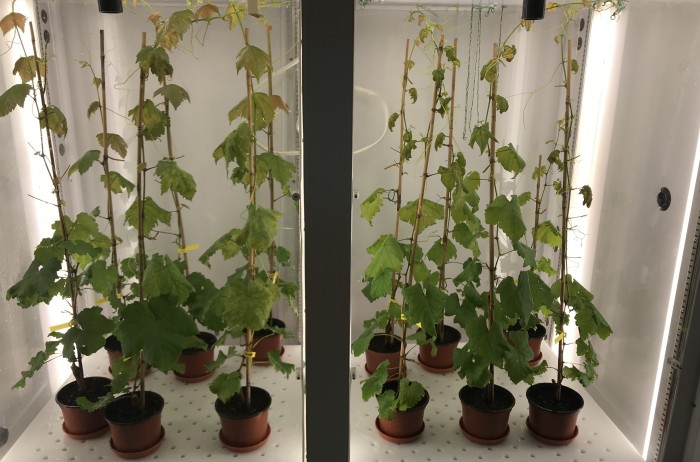 The amount of synthetic pesticides applied in viticulture is relatively high compared to other agricultural crops, due to the high sensitivity of the grapevine (Vitis vinifera L.) to fungal diseases such as downy mildew (Plasmopora viticola), powdery mildew (Oidium) or grape bunch rot (Botrytis cinerea). Alternatives to reduce fungicides are utterly needed to ensure a sustainable vineyard-ecosystems and consumer acceptance.

Essential oils (EOs) are amongst the most promising natural plant protection and have shown their antibacterial, antiviral and antifungal properties, on several agricultural crops. However, the efficiency of EOs depends highly on timing and method of application, and the molecular interactions of host, pathogen and EO, which underlie the efficiency of EOs, is not understood. To circumvent the drawbacks of direct application, the present project aimed to evaluate whether a continuous fumigation of EO vapor can control different pathogens and to decipher the molecular interactions of host and pathogens caused by EO application to and understand underlying mode of actions.
Within the project, a custom-made climatic chamber was constructed, which enabled a continuous fumigation of potted vines with different EOs during long- and short-term experiments. To determine different constituents of EO as well as the concentration vapor of EO inside the chamber a GC-FID method was developed. Different EOs were first chosen according to their reported efficiency in the literature and subsequently tested on different vine pathogens and evaluated visually. Most efficient oils were those from Thymus vulgaris and Origanum vulgare, which was were subsequently used for long term molecular studies on the most ‘responsive’ pathogen P. viticola.
Several experiments with vine cuttings of cv Chasselas, infected with P. viticola and subsequently exposed to continuous fumigation of different concentrations of EOs with different concentrations and application times were conducted. Plant physiology (photosynthesis, growth rate) was recorded and leaves of different time points were sampled at different time points for subsequent RNA extraction.

As major result of the project, we could show that O. vulgare oil vapor treatment during 24h post-infection was sufficient to reduce downy mildew development to 95% which proofs the hypothesis that the vapor phase can is sufficient to control pathogens. By extracting RNA from different EO treatment followed by RNA-seq analysis the visual observation could be confirmed by read mapping onto the V. vinifera and P. viticola genomes. Less than 1% of reads could be mapped onto the P. viticola genome from treated samples, whereas up to 30 % reads mapped from the controls, thereby confirming visual observation of P. viticola absence under treatment. An avg of 80 % of reads could be mapped onto the Vinifera genome for differential expression analysis, which yielded in a total of 4800 modulated transcripts.

Analysis of differentially expressed genes showed that genes triggered by EO treatment were principally linked to plant biotic stress response and plant-pathogen interactions. Key genes controlling ethylene synthesis, phenylpropanoids and flavonoid synthesis were highly activated by EO as well. These results were to first to elucidate EO-host-pathogen interactions of EO vapor and indicate that the antifungal efficiency of EO is mainly due to the triggering of the innate autoimmune system of host plants. These results are of major importance for the production and research on biopesticides, plant stimulation products as well as for resistance breeding strategies.